As a fan of football club Bayern Munich the expired season for me started hopefully and optimistically, but ended horribly and terribly. Still I’m paralysed because of the undeserved loss against Chelsea and their tacky win against us in the Champion’s League final at the Allianz Arena. Three days of sober hangover and nightmarish backflashs of the missed penalties by Robben and Schweinsteiger! Usually every day I’m reading articles on sports sites in the internet, but this time for four days I stayed abstinent. Even today I cannot unaffectedly read about this stinking-to-heaven injustice. However, I didn’t managed to not notice anything. And what I noticed piqued me to finally write about the Heaven-and-Hell rhetoric in sports journalism.

But before I turn to some remarks I read regarding Bayern’s loss, let me go back to March, when Bayern dummied Basel and reduced them to mush, when they made Basel’s standards as a Champion’s League participant going to the dongs. That’s what the Swiss paper blick.ch wrote.

The following article completely bashes Vogel and smushs him into cow pat. The writer “rubs his eyes in disbelief” due to Vogel’s decision to let Huggel, Stocker, and Degen going stale on the bench. The substitutes were a blunder.

But it wasn’t only the manager’s fail. The players, too, sucked. Two of them the journalists picked out to mock. 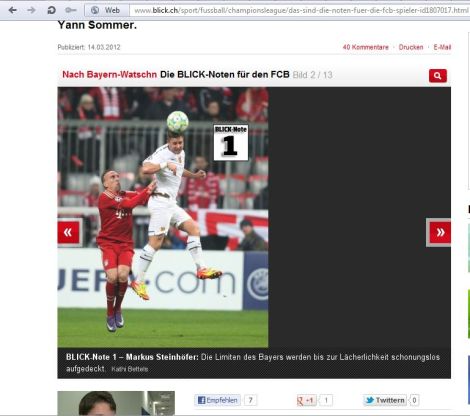 Markus Steinhöfer, the defender, was awfully graded, without lack of a disgusted justification: “The limits were pitilessly revealed up to laughableness.” Then there is an extra article about Xherdan Shaqiri who, upcoming season, leaves Basel for Bayern Munich in exchange for a truck full of bulging suitcases with odoriferous banknotes in them – a deal that had been fixed then.

“What a lesson!Is this Bayern a number too big for Shaqiri? Ouch! What a lesson for Xherdan Shaqiri – in face of his future colleagues of all. Is he getting afraid?”

Having graded him with the second worst mark the writer gravely doubts whether Shaqiri has any chance of even putting his points of the toe on the pitch for Bayern Munich. Neither Robben and Ribbery, nor Lahm and Alaba he can easily supersede. Especially not when playing like sissy that night.

First, when I read all of this I was frowning. What do they expect?! They were playing Bayern Munich! And what’s this rhetoric to put everything in question?! They only could loose. The win against Bayern in the first leg was just luck! Okay, loosing 0:7 is a humiliation and degradation par excellence, but, pfff, who are they?! Even having thrown out Manchester United is no argument of being expecting at all!

That’s the same with the ideas even a serious internet platform like spox.com bring forth. I think somehow it is ridiculous when Jupp Heynckes, the manager of Bayern Munich, is displayed as a complete stamen of a looser. Of course, there is Pep Guardiola now on the market, and maybe he could imagine to coach our squad, but it’s also reverie. And a sweetest of sweet dreams it is! But it is not only Henyckes who is blamed, it’s the players too, yes even German football as whole! But what if Robben or Schweinsteiger or Olic didn’t miss their penalty? Bayern would have won! Then none of these questions would be raised.

However, then I asked myself, for whom are the papers writing? They do not address the managers and the players (and the others in charge), at least not mainly, but their readers are fans. And fans, who are we? Bundles of emotions, that’s what we are! And we don’t like to loose. Apart from this, unlike the players and the manager, we have no possibility to interfere. Whereas for them it is mainly a question of ability, for us it’s a question of fate. We are susceptible to the powers of the game. So there is no way for sublimation, no way to transform the inner hyper-force of our feelings into dogged training. Thus, we need another outlet. And this is the Heaven-and-Hell rhetoric of sports journalism. Thank you!